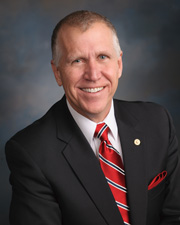 *Includes contributions from other candidate committees.

NOTE: All the numbers on this page are for the 2015 - 2020 election cycle and based on Federal Election Commission data released electronically on 10/19/20 for Fundraising totals, Source of Funds and Total Raised vs Average, and on 09/08/20 for Top Contributors and Industries.  ("Help! The numbers don't add up...")

WHY DON'T THE NUMBERS ADD UP?

Sometimes it's hard to make apple-to-apple comparisons across some of the pages in a candidate's profile. Here's why:

Summary numbers - specifically "Total Raised and Spent" and "PAC/Individual Split" - are based on summary reports filed by the candidates with the Federal Election Commission. All other numbers in these profiles ("Quality of Disclosure," "Geography" and "Special Interests") are derived from detailed FEC reports that itemize all contributions of $200 or more.

HOW CURRENT ARE THESE FIGURES?

The figures in these profiles are taken from databases uploaded by the FEC to the internet on the first day of every month. Those databases are only as current as the FEC has been able to compile by that date (see the note above about lag times for data entry).

The Center updates figures for "Total Raised and Spent" and for "PAC/Individual Split" a few days after the first of the month. The remaining figures - based on detailed contribution data - is updated by the Center after the 20th of every month. This gives us time to analyze the contributions and categorize them by industry and interest group.

The organizations themselves did not donate, rather the money came from the organizations' PACs, their individual members or employees or owners, and those individuals' immediate families. Organization totals include subsidiaries and affiliates.

Why (and How) We Use Donors' Employer/Occupation Information

The organizations listed as "Top Contributors" reached this list for one of two reasons: either they gave through a political action committee sponsored by the organization, or individuals connected with the organization contributed directly to the candidate.

Under federal law, all contributions over $200 must be itemized and the donor's occupation and employer must be requested and disclosed, if provided. The Center uses that employer/occupation information to identify the donor's economic interest. We do this in two ways:

Of course, it is impossible to know either the economic interest that made each individual contribution possible or the motivation for each individual giver. However, the patterns of contributions provide critical information for voters, researchers and others. That is why Congress mandated that candidates and political parties request employer information from contributors and publicly report it when the contributor provides it.

In some cases, a cluster of contributions from the same organization may indicate a concerted effort by that organization to "bundle" contributions to the candidate. In other cases—both with private companies and with government agencies, non-profits and educational institutions—the reason for the contributions may be completely unrelated to the organization.

Showing these clusters of contributions from people associated with particular organizations provides a valuable—and unique—way of understanding where a candidate is getting his or her financial support. Knowing those groups is also useful after the election, as issues come before Congress and the administration that may affect those organizations and their industries.

The figures profiled here include money from two sources: These contributors were either the sponsors of a PAC that gave to the politician, or they were listed as an individual donor's employer. Donors who give more than $200 to any federal candidate, PAC or party committee must list their occupation and employer. Based on that information, the donor is given an economic code. These totals are conservative, as not all of the individual contributions have yet been classified by the Center.

In cases where two or more people from the same family contributed, the income-earner's occupation/employer is assigned to all non-wage earning family members. If, for instance, Henry Jones lists his employer as First National Bank, his wife Matilda lists "Homemaker" and 12-year old Tammy shows up as "Student," the Center would identify all their contributions as being related to the "First National Bank" since that's the source of the family's income.

Although individual contributions are generally categorized based on the donor's occupation/employer, in some cases individuals may be classified instead as ideological donors. A contribution to a candidate may be given an ideological code, rather than an economic code, if the contributor gives to an ideological political action committee AND the candidate has received money from PACs representing that same ideological interest.

Feel free to distribute or cite this material, but please credit the Center for Responsive Politics. For permission to reprint for commercial uses, such as textbooks, contact the Center: info[at]crp.org

Select an amount to make a donation.