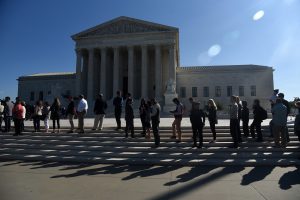 WASHINGTON, DC – People wait in line outside of the Supreme Court to hear oral arguments in Gill v. Whitford on October 3, 2017 in Washington, DC. (Photo by Olivier Douliery/Getty Images)

When Ulysses S. Grant ran for president in 1868, he benefited from large contributions from wealthy entrepreneurs, such as railroad tycoon Cornelius Vanderbilt.?“Never before was a candidate placed under such great obligation to men of wealth as was Grant,” one historian said of Grant’s donors’ largesse.

But if Grant was among the first presidents to receive large sums of campaign funds from rich businessmen, he was far from the last.

Money and politics in the United States have become increasingly intertwined, a relationship which reached new heights when the Supreme Court ruled in Citizens United v. Federal Election Commission (FEC) to allow corporations to spend unlimited amounts of money independently in support of or in opposition to a candidate. The effects of Citizens United have been pivotal, and calls to overturn the ruling continue to this day.

However, Citizens United didn’t appear out of nowhere. The ruling was only the latest in a series of important court cases that have loosened campaign finance restrictions.

In the U.S., political contributions are considered an exercise of First Amendment rights. The reasoning behind this was that communicating ideas required spending money.

The 1976 Supreme Court case Buckley v. Valeo was the first case to establish this idea.

In 1975, Sen. James Buckley of New York and others filed suit in U.S. district court against the FEC and Senate secretary Francis Valeo claiming that the 1971 Federal Election Campaign Act — the primary federal law regulating campaign finance — was unlawful. According to Buckley, the law’s limitations on campaign contributions and expenditures violated the First Amendment. When the law was upheld, the plaintiffs appealed to the Supreme Court.

In Buckley, the judges ruled that contribution limits were necessary to deter corruption as candidates would feel indebted to big donors. Expenditure limitations, on the other hand, violated freedom of speech since there was no clear connection between expenditure amounts and corruption. In short, candidates could spend unrestricted amounts to advance their campaign.

The Court also deemed independent expenditures – or outside spending by groups in support of or opposition to candidates – constitutionally protected in the Buckley case so long as these expenditures were not formally coordinated with the candidate.

The idea of “express advocacy” was first formulated in the case, too.?The Court defined express advocacy as communications that “advocates the election or defeat of a clearly identified federal candidate” and are identifiable by eight so-called “magic words.” The words (and phrases) include “vote for,” “elect,” “cast your ballot for” and “reject.” Any ad using any one of these words would be considered “express advocacy,” according to the Court, and subject to federal campaign regulations.

Corporations have rights, too 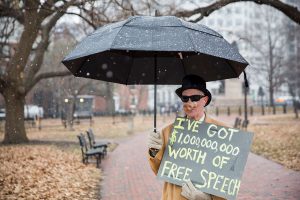 David Barrows, of Washington, DC, holds a sign while he watches a rally calling for an end to corporate money in politics and to mark the fifth anniversary of the Supreme Court’s Citizens United decision(Photo by Drew Angerer/Getty Images)

Corporations’ right to participate in campaigns as a legal person, which was popularized in Citizens United, is not a new concept. Lesser-known cases after Buckley paved the way for the involvement of corporations.

Justice Lewis Powell, who delivered the opinion of the Court, argued that corporations, along with associations and unions, have the same rights as individuals to express political views.

Attempts to reign it in

In the 1980s, court cases challenged the definition of “express advocacy” put forward by Buckley.

In FEC v. Massachusetts Citizens for Life, the Supreme Court held that a communication does not have to use the so-called “magic words” to be considered express advocacy. Massachusetts Citizens for Life (MCL) had used treasury funds to create flyers encouraging people to vote “pro-life” and included the names of pro-life candidates running for office. Although MCL had not used any “magic words,” the judges ruled the ads were clearly an attempt to influence an election.

Also in the 1980s, the FEC took land developer Harvey Furgatch to court after he purchased a full-page ad in The New York Times and Boston Globe to encourage voters to prevent “four more years of incoherences, ineptness and illusion” under then-President Jimmy Carter. The case came to be known as FEC v. Furgatch. Furgatch’s defense was that the ad used none of the “magic words” listed in Buckley and remained vague enough to get a legal pass.

The Ninth Circuit Court of Appeals held that speech could be express advocacy when it is “susceptible of no other reasonable interpretation” – as in this case. They ruled that implied meanings can be considered express advocacy, and therefore Furgatch’s advertisement expressly advocated the defeat of President Carter.

Despite these new limitations on independent expenditure, the ambiguous wording of these laws meant that they were ineffective regulatory tools. The lack of expenditure limits and loose regulations for outside spending created massive inflows of money into campaigns.

The Act also prohibited corporations from funding electioneering communications, or broadcast advertisements mentioning a federal candidate within 30 days of a primary election and 60 days of a general election. It thereby ignored the ambiguities of the Buckley and Furgatch cases.

A year later, the Supreme Court upheld BCRA in McConnell v. FEC, determining most of BCRA’s provisions constitutional and noting the “substantial evidence to support Congress’ determination that large soft-money contributions to national political parties give rise to corruption…”

All this changed four years later in a case that a number of legal scholars believe was the stepping stone to Citizens United.

The rise of dark money

Wisconsin Right to Life (WRTL), a politically active nonprofit, ran ads encouraging viewers to contact two U.S. senators during the 2004 presidential election. By running the ads, the group broke the BCRA’s rules restricting political ads funded by corporations in the 60-day period before an election. WRTL ended up suing the FEC, claiming that BCRA was unconstitutional.

In FEC v. Wisconsin Right to Life, the Court deemed BCRA’s prohibition on corporate electioneering communications as unconstitutional. Their reasoning was that ads crafted to focus on policy issues and implicitly advocating for or against candidates should not be considered express advocacy, and therefore cannot be regulated as such – essentially the opposite of the conclusions made in Furgatch.

As long as the ads left out the “magic words” then, a group could easily spend limitless amounts without needing to disclose their donors or report political spending to the FEC.

Wisconsin gave rise to massive spending by dark money groups like political nonprofits that are not legally obligated to disclose their contributions.

During the 2008 election cycle, the first presidential race after Wisconsin, dark money spending on presidential candidates increased from virtually zero to about $25 million. In the 2012 cycle, the amount soared to $141 million.

The Wisconsin Right to Life case is noteworthy not only for helping enable dark money spending but for demonstrating how much the composition of the Supreme Court matters, Brendan Fischer, an attorney with the Campaign Legal Center, said.

In 2006, Justice Sandra Day O’Connor retired and was replaced by Samuel Alito, a conservative-leaning justice, which shifted the dynamic on the court.

“Between the McConnell case and the Wisconsin Right to Life ruling, really nothing changed in terms of the statistics or practices of campaign finance,” Fischer said. “All that changed was the makeup of the court.

“[This case] is a reminder that the ideology of the court makes a significant impact.”

When Citizens United v. FEC was decided in 2010, its impact did not shock people closely monitoring campaign finance.

Citizens United wasn’t surprising, Fischer said, given the court’s previous rulings, including its findings in Wisconsin Right to Life.

Paul S. Ryan, vice president of policy and litigation for the watchdog group Common Cause said that the Wisconsin case did a lot of the damage often attributed to Citizens United as well as much of the damage to campaign finance laws attributed to the Supreme Court.

“Wisconsin Right to Life made permissible corporate funding and created the vague legal standard that acted as a major step toward Citizens United,” Ryan said.

In Citizens United, judges used the ideas stated in previous cases to make their conclusion: As long as money is not given directly to or used in coordination with a candidate, it is not corruptive, and corporations too have the right to freedom of speech.

This line of reasoning also led to the federal Court of Appeals’ 2010 decision in SpeechNow.org v. FEC, which reinforced?Citizens United and removed all contribution limits to independent expenditure-only groups. The SpeechNow.org ruling created?super PACs, which can raise and spend unlimited money to advocate for or against a political candidate, including donations from corporations.

The Supreme Court’s most recent major case on campaign finance,?McCutcheon v. FEC, addressed direct contributions rather than outside spending. In this case, Alabama resident Shaun McCutcheon objected to the aggregate contribution limit of $123,200, the amount that individuals were allowed to donate to all federal candidates and parties combined in a single election cycle. He sued the FEC, claiming that the aggregate limit on contributions violated his First Amendment rights.

The majority of the Court agreed with McCutcheon, concluding that one individual donating to many groups does not necessarily give rise to “influence over or access to” elected officials or parties the same way that a single large contribution might. While base limits (the amount allowed to be donated to each candidate) were deemed constitutional, aggregate limits were ruled a violation of a person’s freedom of speech.

Because of these rulings, over the last half century or so, federal campaign finance has become an extremely complex system, balancing transparency and avoiding corruption with freedom of speech and political participation.

At OpenSecrets.org we offer in-depth, money-in-politics stories in the public interest. Whether you’re reading about 2020 presidential fundraising, conflicts of interest or “dark money” influence, we produce this content with a small, but dedicated team. Every donation we receive from users like you goes directly into promoting high-quality data analysis and investigative journalism that you can trust. Please support our work and keep this resource free. Thank you.

Select an amount to make a donation.