Whether it's analyzing campaign contributions by gender or looking closely at the drop in spending on federal lobbying, OpenSecrets.org sometimes takes a deep dive into an important money-and-politics subject. 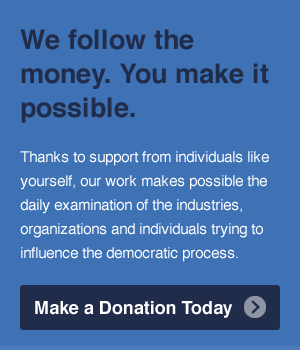 The field of candidates running for office in 2020 is the most diverse in recent history, but OpenSecrets found that the 117th Congress will be, at most, only marginally more diverse than the 116th.
[Read more]

Written after OpenSecrets broke the news of Sen. Richard Burr's controversial stock sales, this series explores the personal finances of the 116th Congress. OpenSecrets has updated its personal finaces section to include lawmakers' most recent financial disclosures.
[Read more]

Women are becoming politically engaged at an earlier point than ever before. More than 1 million women have donated to 2020 presidential candidates thus far, following the rise of fundraising participation by women in the wake of President Donald Trump's election.

But women are not a monolithic fundraising or voting bloc, and there are key differences in fundraising patterns from women in different pockets of the country. Suburban women, who power a significant electoral battleground, are a key demographic for 2020.
[Read more]

Political operatives and lobbyists continue to take spins through the revolving door between government and the private sector under President Donald Trump's watch, despite his pledge to "drain the swamp."

The Center for Responsive Politics created an in-depth report exploring President Donald Trump's international business interests and entanglements in over 30 countries across the globe. Trump's sprawling web of foreign properties and investments, which includes some projects completed during his presidency or still under development, reveals a litany of opportunities for — and apparent efforts by — foreign business leaders and governments to gain influence with the leader of the free world.
[Read more][Download PDF version]

Following an in-depth report exploring the most expensive midterm election ever, this four-part series explores the high price to win elections, surprising shifts among major industries, a new "dark money" milestone and the power of the female donor. [Read more about our findings]

In our new report on women in politics, we document donations by women in the most recent election cycles and show a major increase in the number of female candidates seeking to serve in Congress. [Read more about our findings]

People change jobs all the time, but what does that mean in the lobbying world? Our research found that nearly a third of the lobbyists who stayed at the same organization, but did not report any lobbying activity in the first quarter, have titles that indicate they are still working on influencing U.S. federal policy. Was the swamp drained, or are they simply trying to circumvent the rules? [Read more] 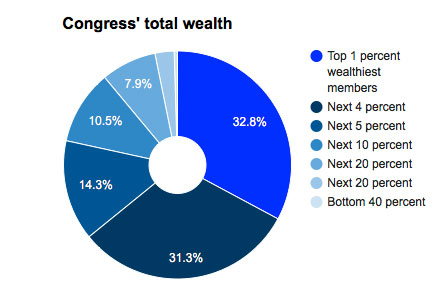 Personal wealth: a nation of extremes, and a Congress, too
November 17, 2015
Wealth inequality in the United States is pervasive — so much so that it's apparent even in Congress. The House and Senate have their own form of inequality within their ranks. Of the 534 current members, the 53 richest owned nearly 80 percent of the estimated wealth held by all federal lawmakers in 2014, a Center for Responsive Politics analysis shows. That concentration resembles the inequality that exists in the United States more broadly, where 76 percent of the country's wealth is held by the top 10 percent of households. [Read more] 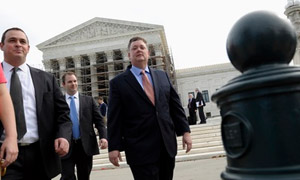 McCutcheon v. FEC
The April 2014 Supreme Court decision in McCutcheon v. Federal Election Commission removed aggregate limits for individual donors giving to candidates, political parties and PACs. There are still limits on how much any individual may give to each of those committees. No longer, though, is there an overall cap on how much one person can give to these committees combined in an election cycle; the last such limit, which was in place until the court's ruling, was $123,200. [Read more]

Waning Influence: the rise of the "unlobbyist." [Read more]

In addition, below you will find the Center's original, long-form journalism. We also keep you informed about money-in-politics issues each day at the OpenSecrets News.

August 25, 2016 |         Outside groups have aired almost half of all political ads for Senate races this election cycle, an all-time high at 49 percent. Entities not associated with campaigns –?such as PACs, super PACs and political nonprofits –?are especially dominating the competitive contests, sponsoring more than 80 percent of ads in Ohio, Pennsylvania…

Wealthiest Places, Maybe. Biggest Contributors, Not So Much.

September 25, 2014 | With all the talk of U.S. elections being hijacked by bellicose billionaires, it’s easy to forget this fact: Very few Americans overall make political contributions, and while those at the top of the income scale have more resources, they’re often reluctant to invest their wealth in trying to influence elections. OpenSecrets.org ran the numbers?on political…

Sex, Money and Power: New Report on Women as Donors and Candidates

September 26, 2013 | While women are playing bigger roles as candidates and as donors than they were twenty-plus years ago, in some ways things have changed surprisingly little. In the 1990 campaign cycle, 22 percent of all itemized federal contributions came from women. So far in this election cycle, the number's up to just 25 percent. This 3 percent increase, substantially smaller than the increase seen in the numbers of female elected officials, is one telling component in a much more complex story about how campaign donations by women have changed over time.

August 29, 2013 | President Obama might hope that his new education initiative doesn't rile too many in academia: By reputation, college professors and staff members are solid Democrats, and a deeper look at their campaign contributions by the Center for Responsive Politics mostly backs that up -- though certain types of schools tend to skew more left than others.

January 16, 2013 | Think the Congress that just ended was out of touch with America? The new one may be no better, judging by how much it's worth. Overall, lawmakers are even wealthier than in previous years, according to our analysis of their 2011 financial disclosure statements, and 257 of them -- seven more than in 2010 -- are millionaires.

January 9, 2013 | Like everything else this election cycle, the inauguration festivities for President Barack Obama's second term will likely cost a fortune. The Center for Responsive Politics' new inaugural donor tracker compiles everything we know about the individuals and companies helping Obama's Presidential Inaugural Committee (PIC) pick up the tab.

Some of Our Favorite Money-in-Politics Stories of 2012

January 1, 2013 | A year-in-review listicle of some of our favorite money-in-politics journalism of 2012.

The (Michael) Huffington Network: Romney’s Evolving Relationship With His Donors

March 29, 2012 | The Mitt Romney of 1994 spoke passionately about the influence of money in politics and decried big-money campaigns like those of his then-Senate opponent, Ted Kennedy, and California Rep. Michael Huffington. But many Huffington donors from that era are now among the most generous contributors to Romney's presidential bid.

February 21, 2012 | Super PACs supporting presidential candidates continue to take in six- and seven-figure contributions from individuals who also have given the legal maximum to the candidate's campaign committee.

February 7, 2012 | Is Ron Paul the candidate with the most machismo? There's certainly something about him that appeals to others of the male persuasion.

February 4, 2012 | A shadowy group blast-texted a message critical of Republican Mitt Romney in the wee hours of morning Saturday. The attack was targeted to Colorado voters ahead of Tuesday's GOP caucuses.

February 2, 2012 | Republican Mitt Romney relied on the finance, insurance and real estate sector for roughly $2 out of every $11 he raised during the fourth quarter of 2011, according to a new analysis by the Center for Responsive Politics of campaign finance documents submitted Tuesday to the Federal Election Commission.

February 1, 2012 | Coming off a big win in the Florida primary race Tuesday night, Republican presidential contender Mitt Romney continues to gain steam at an impressive clip that threatens to leave his GOP rivals in the dust.

February 1, 2012 | Harold Simmons, long one of the GOP's most prolific donors, cemented his place on the speed-dial of fundraisers for conservative causes on Tuesday as several super PACs reported huge hauls from the Texas billionaire in their 2011 year-end campaign finance reports. Simmons and his holding company, Contran, gave $8.5 million to three super PACs, two of which support candidates for the GOP presidential nomination, in the last quarter of the year.

February 1, 2012 | In this Internet Age, 81 senators have Twitter accounts for lightning-fast communication. Yet only a handful of them typically file their campaign finance reports electronically.

January 31, 2012 | Sixteen lobbyists raised nearly $2.2 million to aid the presidential campaign of former Massachusetts Gov. Mitt Romney in 2011, according to a Center for Responsive Politics review of documents filed with the Federal Election Commission.

Where in the World Are Barack Obama’s Bundlers, Part 3

January 31, 2012 | Last year, 445 bundlers collectively raised at least $74.4 million for Barack Obama and the Democratic National Committee. That represents $35 out of every $100 the two organizations have raised since April, when Obama launched his re-election bid.

January 27, 2012 | President Barack Obama's re-election campaign is refunding the donations of five registered federal lobbyists who gave to the committee last year, OpenSecrets Blog has learned. Some of these refunds were triggered after OpenSecrets Blog brought the contributions to the campaign's attention. The Obama campaign has pledged to refuse contributions from lobbyists, continuing a policy it set during the 2008 campaign.